In March 2020 just before the Covid-19 lockdown came into effect in the UK and during the four fights UCU strike action at Goldsmiths I was asked to shoot a short film with students and colleagues from Goldsmiths University MA Filmmaking course. 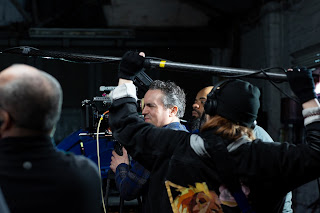 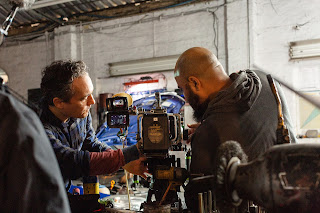 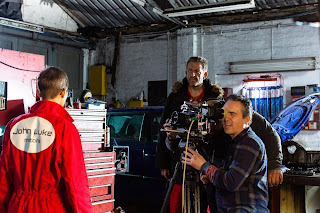 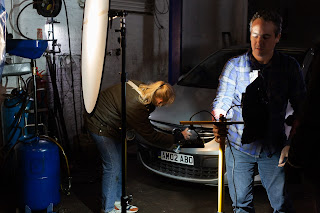 The film is set in a garage and sees two employees go about their work only to out perform each other in this high-jinks farce.

Lalacuna music promo for Boxer F. and the song 'Tears in Cigarettes'.

Filmed in New Cross at the beginning of 2019 this promo was a real treat to be part of. 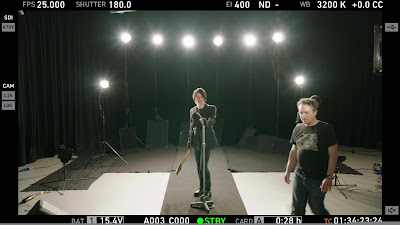 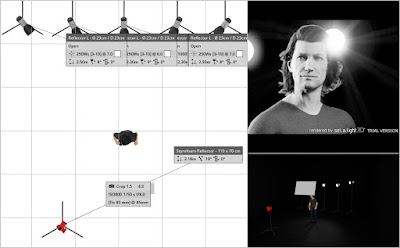 In 2013 I departed Focus24 (F24) to work at Goldsmiths, University of London. Back then F24 was based in a relatively new building on Central Street in the Old Street area of East London – a far cry from the humble beginnings on Hoxton Square. Today I have made the journey to Acton in West London to visit F24’s new digs on the well-known Park Royal Industrial Estate. Park Royal is home to some of the leading film equipment companies such as Panalux, Cirrolite, Take 2, VMI, SOLA Lighting and the now well-established studio facility Black Island Studios. The purpose of my visit – as well as to see F24’s new home – is to help establish industry contact and also to see what the latest trends are in the world of camera equipment hire.

The building is situated in amongst many like it – however on entering I was greeted by some well-dressed men who where pleased to see people where arriving. I signed in and made my way into a large function room with drinks and a huge flat screen TV (England V’s Croatia world cup semi-final). I got chatting to an old colleague I worked with on a short a few years back and then Ben Mitchell, F24’s owner, gave us a whirlwind tour of the facilities. Consisting of two large prep rooms, Lens collimation space (Gecko collimator & dark out room with projector) and a massive kit room floor with its own bay for an off road vehicle purpose built for filming. The bookings team have their own office and the hallways are decked out with inspiring film posters and comfy chairs for hanging out on. The space is brand spanking new and purpose built for the accommodation of pre-shoot test crews and equipment hire builds and processing to the highest standard.

Over the years since working at F24 I have increasingly noticed the name appear in credits of some of the most creative and technically excellent productions I have seen in commercials, music promos and independent films. When F24 acquired Filmscape Media in 2017, a well-established equipment hire company previously based at Pinewood studios and recently relocated to Acton, the F24 family expanded. With the addition of Motion24 and rummors of U24 in the pipeline, it seems F24 are well placed to weather the future. With other well-established companies just a stone throw away (Panavision, VMI, ARRI Rental etc.) this will be a space to watch in the world of film equipment hire over the coming years.

Stade Films is a filmmaking collective based in Hastings, UK and I am proud to have helped out on the award winning short The Captains Daughter as well as also featuring in the fantastic Dancing in the Street video that wonderfully shows of Hastings pier and other locations in and around the seaside town.

If you are interested in film and are serious about being a Cinematographer then I would highly recommend getting a small group of friends together and visiting the Camerimage festival in Bydgoscve, Poland. Comprising of a small equipment market area most events are held at the Opera Nova in the town centre. However there are many other events held all over the place in varying venues so well worth exploring - plus the old town is a good place for sightseeing and photography. Here are some notes I made whilst visiting Camerimage 2017.


Having arrived in Poland and familiarised myself with the local surroundings I headed into Bydgoscve center to my first proper day at Camerimage. I made my way to the main event venue ‘Opera Nova’ to assess the schedule and purchasing ticket passes. I decided not to get a week long pass but to instead buy individual passes for specific events (writing this up after the end of the festival I think I should have just brought a weekly pass even though I was only visiting until the Tuesday - full week passes are 390 Zloty - that's about £60). By only purchasing tickets for specific events I found myself having to think a lot more about when and where I could be and uncertain if I could buy a ticket as some events only went on sale 10 mins before they started. The up side however was I wanted to try and do the festival on a budget and managed to do this. a seminar cost 10 zloty and a screening also.

Im inside the Multikeno in Bydgoscve Poland and am sitting in the waiting area outside the screening rooms. I accidentally bought a ticket for Cocaine Grandmother when I actually asked for a ticket to the Darren Aronofsky film Mother! (Im blaming language translation barrier - i,e I can't speak Polish) Now I am sitting here thinking actually I could try and sneak into the screening I wanted to see that also has a Q&A with Chris Doyle and Anthony Dog Mantis. The staff look like they are quite organised but I don’t know if they will check tickets on entry to the screening rooms. I will sit here and observe what happens. Sometimes I know that after the film starts the steward leaves or sits down. If it is full then it could be very embarrassing but if it isn’t it could be a good event to attend.

Well I managed to blag my way through in the company of the visiting Cinematographers and got a good seat. We watched Christopher Doyles latest film ‘The White Girl’ and then after Christopher Doyle, Anthony Dod Mantel, Ed Lachmen and Jenny Suen (Director of The White Girl) sat at the front of the cinema and the ‘Like a Virgin’ discussion started. The concept of the discussion was 'how does each member of the panel keep their approach to film fresh and virgin like'.


Canon workshop
Stephen Goldblatt the Cinematographer holding this workshop worked with Robert Redford and Jane Fonda on ‘Our souls at Night’ and in that film he shot them in a bedroom scene. For the workshop he wanted to demonstrate how to light people of age in a flattering way. Also how to film actors in darkness or give the impression of darkness. Modern high sensitivity cameras can film in virtual darkness but the lighting will be flat or unmotivated. Physically on set actors need light to work with and as the audience we need to see their eyes lit.

Stephen went on to talk about the importance of pre shoot tests. He suggested testing everything prior to the actual shoot. Things that might need testing are wardrobe choices - these may include patterns, textures, qualities that change under different lighting conditions. Make-up, set design also should be looked at. Materials used on screen should be thoroughly checked under varying conditions. On set there won’t be time to experiment as much as in pre-production - shoot tests. It is the Cinematographers responsibility - even if not requested by the production to proactively pursue these things. On set small tweaks that require a lot of attention and focus might not be possible during the chaos of a busy shoot.

He talked about how actors are just people and they have their own personalities and ways of doing things like everyone else. Pre-shoot meetings should occur to allow understanding of each other to develop. When working with actresses they tend to have a strong idea of how they would like to be lit - may have a preferred side of the face. People of age may want to be lit in a flattering way to ensure they are represented as best can be.

A mention of how eye lines are a huge part of the communication with the audience. Techniques like tape on matt box to enable consistent eye lines. Most actors are familiar with the idea of not making eye contact when delivering lines. Using high ISO/Sensitive camera’s used to have lots of lights for example in the 1993 film The Pelican Brief scene on Madison Steet would have used lots of lights to achieve the shot. Now days its possible to achieve the same shot but without an army of trucks and people. Shouldn’t shoot wide open either as you want a large depth of field to see the location as its a part of the story. 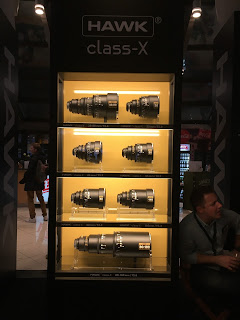 Daniel Pearl - Likes the detail in the bokeh after the de-squeez. He only uses rec709 in all his work as used to the solid workflow and can light to the final look.

Mag’s - Likes to stamp the image (creating a destructive/burnt in style that cant be removed from the shots) as knows won’t be part of the grading process.

A member of the audience asked about the use of filters with anamorphic lenses. Mag’s replied that she uses a lot of things to destruct the image as much as possible to create unique look. Stewart mentioned that when filming women he creates image adaptation by placing nets in front of and behind the lenses.

It was also great to witness the enthusiasm of Wayne Isham and his whirlwind tour of some of the amazing back catalogue of music videos he has made since a lucky break after putting together a Jimi Hendrix archive clip in his old job. He has directed videos for the likes of Metallica, Britney Spears, Michael Jackson, Foo Fighters, One Republic, Sheryl Crow and Richy Martin to name a few.


As well as these events I have mentioned there are also some fantastic networking opportunities and the town of Bydgoscve is well worth exploring. This year also saw the appearance of David Lynch showing his latest Twin Peaks series (Episode 1 & 2) and holding a Q&A after with great insight into his process to filmmaking. The neighbouring town of Torun held an exhibition of his work. Once again I would highly recommend attending Camerimage if Filmmaking and Cinematography are your interest.

Chislehurst: A Town on Top of a Tinderbox is a documentary about the town of Chislehurst and its involvement in the first world war. The program was commissioned by The Chislehurst Society through Chislehurst Caves - a place I have worked for since I was teenager. When asked to create a short documentary about the caves use as a munitions storage facility I jumped at the opportunity.  I had the chance to work with the Black Magic Cinema Camera using 12mm, 25mm and 50mm MFT SLR Magic lenses for this project. As well as this camera I also used my DSLR to acquire run and gun footage when needed. Sound was always going to be tricky with just myself doing the filming on those parts. Here is a link to the documentary - please use the password: 9Degrees to view it. https://vimeo.com/125403255
at November 10, 2017 No comments: